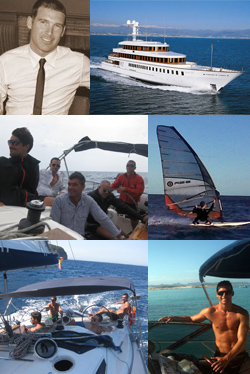 Sergio Ravenet Huveneers (Barcelona, 1972) has a very broad understanding of the boating industry, as it has been part of his life since he first started sailing his optimist at age 11. He later excelled in windsurfing, taking part in amateur and professional competition in Aruba, Hawaii and in Spain, where he took 10th place in the overall PWA Spain ranking in 1996.

Recreational boating came at a later stage after he got his Spanish yachting license in 2007, by renting sailboats to sail the Balearics every summer and enjoying his own speedboat boat along the Costa Brava.

Due to his passion for boats, his friend Felix Silk, currently Chief Steward on 165m Motor Yacht “ECLIPSE” (owned by Roman Abramovich), encouraged him to get his STCW’95 certificate in Antibes to start a career in the Mega Yacht Industry in 2010.

Shortly after, he started working as a day worker on several mega yachts and spent a winter season in Monaco working as crew on 66m Motor Yacht “WEDGE TOO”. In 2014 he got his Yachtmaster 200GT Certificate from the RYA.

His non-yacht-related experience was always indirectly very much related to it as well, having worked as a Sales and Marketing Manager for Helly Hansen (Sportswear, Workwear and Survival Suits) in Spain for over 8 years, and before that for other ocean related brands like Quiksilver, Neil Pryde, and his very own distribution company selling Kinetic Sailboards® in 1996.

Sergio has a Dutch and Cuban background, is a certified translator and is also active in the areas of Real Estate in Barcelona and Havana, Cuba.

"Give your boat the Mega Yacht treatment!"

Facebook for the latest news and to view our online portfolio.